Premier Residential bought the Merkle Hotel at 2405 Pacific Ave. near the University of Washington|Tacoma and plans to convert it to about 45 micro-units, mostly for students.

Richardson said Pfeifer converted the hotel to small apartments, with bathrooms but without full kitchens shortly after buying it in 1981.

Kidder Mathews estimates it would cost about $1.5 million to seismically upgrade and revamp the building, which is mostly in its original condition.

The 250- to 300-square-foot micro-units will have full kitchens and bathrooms, and there will be a residents’ lounge, storage and bike storage, but no parking, Richardson said. The now-vacant retail space will be rented.

“They’re going to try to bring back the original historic look” of the facade, he said.

There are few, if any, micro-units downtown, he said. But the Merkle is near the site where Koz Development is building 104 micro-units. That project is a couple of blocks from Tacoma Link’s Convention Center light rail stop.

“This is definitely a new type of product for the downtown Tacoma market,” said Richardson. He said whether more get built will depend on how the units are absorbed.

There are 1,800 housing units in the pipeline for downtown, and it’s late in the development cycle, he said.

In a press release, Premier Residential and Kidder Mathews said the Merkle Hotel is in the heart of Tacoma’s Brewery District and will help in the area’s long-term revitalization.

Eli Moreno, owner of Premier, said, “We are very excited about this project because it will contribute to the great changes happening in that neighborhood, and serves our mission and commitment to preserve and re-purpose old historic properties in the city.”

Premier acquires and manages real estate. Its website lists apartments and houses for rent in King and Pierce counties, including at The Park at Auburn and I Street Apartments, and Mark Twain Apartments and K Street. It also lists SURGEtacoma, a co-working space.

The DJC reported that in 2016, Eli and Amber Moreno bought the 15,000-square-foot Union Club at 539 Broadway in Tacoma, and converted the 1888 building into a mixed-use complex called Union Club Tacoma. It has studios, co-working and office spaces, common areas, galleries and an event hall.

The Morenos have said Union Club Tacoma contributes to the city’s growing artistic and entrepreneurial communities. 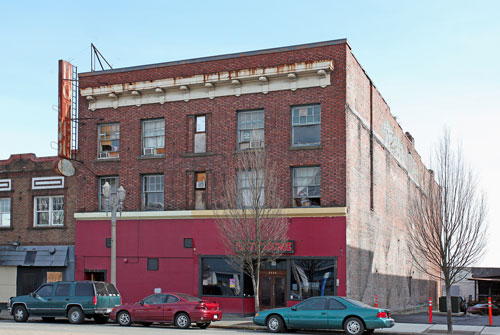 For the full story, go to Seattle Daily Journal of Commerce.

Lake Washington School District (LWSD) has purchased a 25.46-acre property located on the northeast corner of 188th Avenue and future 70th Street in...

A multifamily complex in Seattle’s south end has traded hands as multifamily investment in the Puget Sound continues to pick up. In a transaction...