Most office tenants that have signed a commercial lease have probably heard of the Building Owners and Managers Association or “BOMA.” BOMA is an international organization founded in 1907, with members comprised of varied real estate professionals that range from property developers to corporate facilities managers. This association provides multiple services and resources for its members that include information on building management and operations, development, leasing, building expenses and operating costs, energy consumption patterns, local and national building codes, legislation, occupancy statistics, technological developments and other industry trends. It is important to note that as an organization of property developers and managers, BOMA does not advocate for tenants.

One of BOMA’s most significant roles is to provide guidelines or standards on how a commercial office building or specific suite should be measured. Most office leases on the West Coast reference BOMA measurement standards within the lease language as a standard for measurements.

In October 2017, BOMA released its latest revision of the BOMA Office Standard, a guide for measuring rentable square feet for both existing and new office buildings.

BOMA’s measurement standards continuously change, naturally in favor of the landlord. Many landlords are beginning to use “Modified BOMA” measurements specifications in an effort to allocate building common areas to specific suites because of design inefficiencies. These standards are important because they define the way landlords can pass on the operating costs of the common areas to the tenants.

“The BOMA 2017 Office Standard has two significant changes that negatively impact the tenant. These changes involve the inclusion of major vertical penetrations, private balconies, covered galleries, and rooftop terraces into the usable space calculation,” said Bryan Geisbauer, senior vice president and partner with Kidder Mathews‘ San Diego office. “While these changes will have a negative impact on some tenants, the new standard does allow for the allocation of common area amenities, such as conference rooms and loading docks, to a specific tenant or group of tenants, rather than making such areas available to an entire floor or to the entire building. The change specifies a more detailed level of use and will ensure tenants are not paying for space within the building they do not directly benefit from,” he said.

“There is an increased call for well amenitized spaces in today’s marketplace, private balconies, covered galleries, and rooftop terraces are in high demand. Landlords can now attempt to include these areas in gross rentable space calculations and realize income from them, whereas they had previously been viewed as an amenity to the space,” said Bo Sederstrom, senior vice president with Kidder Mathews‘ Phoenix office. “Tenants who currently have these types of spaces should pay particular attention to the BOMA language at the time of a lease renewal as landlords may attempt to insert the new BOMA standard into the lease documents. Don’t accept the landlord’s “it’s market” or “it’s standard” argument; while it may be a measurement standard, well-represented tenants are pushing back,” he said.

Spaces in the common areas of a building such as elevator shafts and stairwells are referred to as “vertical penetrations.” In the previous BOMA Standard, vertical service areas such as a pipe or mechanical shaft were included in the rentable area calculation, but vertical circulation areas such as stairwells and elevator shafts were not. The new 2017 standard allows for ground floor elevator shafts on lower levels to be added to the rentable square footage of the building, with the reasoning that the lowest level is a public space and should be rented.

“It is common practice for an owner to re-measure an office building, and it typically happens before the sale of a property, after an acquisition of a property, or while repositioning a building or project within the market. It’s rare that a building gets smaller; they typically or “magically” tend to grow. Although the physical structure of the building remains the same, measurement standards have created new ways for landlords to increase the income associated with a property,” said Geisbauer. “While landlords might choose to adopt these revised 2017 standards, they are not obligated to. As such, it’s important to understand the differences between the 1996, 2010 or 2017 standards, and which BOMA standard the landlord is attempting to use in a lease,” he said.

“BOMA is a landlord friendly, non-tenant advocacy organization and its mission is to make its members more profitable. Tenants need to understand this when negotiating and renewing their leases,” said Sederstrom. 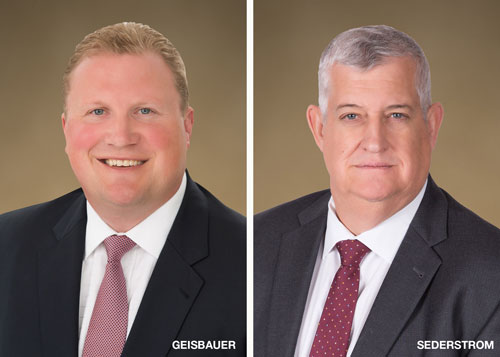 For the full story, go to AZ Big Media.

Kidder Mathews industrial specialist Matt McLennan has been awarded the Society of Industrial and Office Realtors (SIOR) designation. The prestigious...

Ironline Partners, a real estate investment, development, and management company, has sold a 53.75-acre development site located near the southwest...

A joint venture led by Contour, of Costa Mesa, Calif., has received $99 million in construction financing for the five-building first phase of the...